From carrots and sticks to lightbulb moments

Changing the paradigm around teacher motivation

A few months ago, I experienced what you might call a lightbulb moment—seeing my then five-year-old son read his first book from cover to cover, after months of struggling with reading. I don’t think I’ll ever forget the look on his face—the belief he’d gained that he could master anything if he really put his mind to it.

My son is lucky to have an intrinsically motivated professional as a teacher, whom he trusts, respects and values. That lightbulb moment really belonged to her, but I got a fleeting chance to experience it as a father. This, I realized, was the most powerful source of motivation for teachers—and parents—to keep doing our jobs, and to improve at them every day.

A new paradigm for motivation

Most approaches to working with teachers around the world depend on what the author Daniel Pink describes as a ‘Motivation 2.0’ paradigm. This paradigm assumes that the way to improve performance, increase productivity, and encourage excellence is to reward the good and punish the bad. It relies on a system of “if-then” rewards, which effectively assumes, “if you do this, then you’ll do that.”

Pink contrasts that with a Motivation 3.0 paradigm which allows for “Type 1 behaviours”—self-directed behaviour that is focused on the inherent satisfaction of the task itself and the devotion to becoming better and better at something. In Pink’s eyes, many professions today require this kind of intrinsic motivation, with autonomy, mastery, and purpose as the main motivators.

Is teaching a Motivation 3.0 profession?

For the last five years at STIR Education, we’ve essentially been running a large natural experiment to see if Motivation 3.0 applies to teachers in developing countries. And at a pretty reasonable scale: we’ve been working with over 27,000 teachers in 10,000 schools, who are collectively teaching 1.2 million children, in India and Uganda.

We’ve been doing this by supporting governments to run teacher networks: local, ongoing communities of practice that ignite and sustain teacher intrinsic motivation. A typical network is comprised of about 30 teachers across 10 local schools, who meet monthly for a couple of hours. These networks expose teachers to key classroom mastery principles but give them the autonomy to adapt these principles to their own classroom contexts, collaborating with their peers in the process. In addition, the networks are designed to develop underlying behaviours and mindsets—reflective practice, problem-solving, collaboration, self-efficacy and growth mindsets—that make the improvement process an ongoing habit.

Throughout all of this, teachers receive no direct financial incentives and no explicit promise of career gains. And the people running the networks are mostly government mid-tier officials themselves—avoiding the need to build a parallel system, and ensuring the approach is low cost.

We’re still gathering more rigorous evidence around our approach, but one of the early findings from a randomized controlled trial we are running in India is that teachers in our networks are spending a significantly greater amount of time in class actually teaching, based on thousands of independent and unannounced classroom observations. The monetary value of this additional teaching time—measured in terms of teacher salary—is over eight times the cost of running the teacher networks. Another large-scale study underway by ASER, of over 10,000 children taught by our teachers, has indicated initial but statistically significant gains in reading scores of children versus control groups, again after just one year.

What have we learned as a result?

What seems to motivate teachers most are seeing their children progress and learn, and growing into the best teachers they can be. This is not a new concept: Dan Lortie wrote about the ‘psychic rewards’ of teaching in the US context as early as 1975. And yet we seem to have forgotten this narrative in our thinking about teaching in the developing world, and perhaps in the developed world too. We’ve built this insight into the DNA of the teacher networks we run at STIR.

There is a virtuous cycle—or positive feedback loop—between a teachers’ classroom practice improving and their motivation increasing. Seeing improvement motivates them to work harder, which results in further improvement, which boosts motivation further. 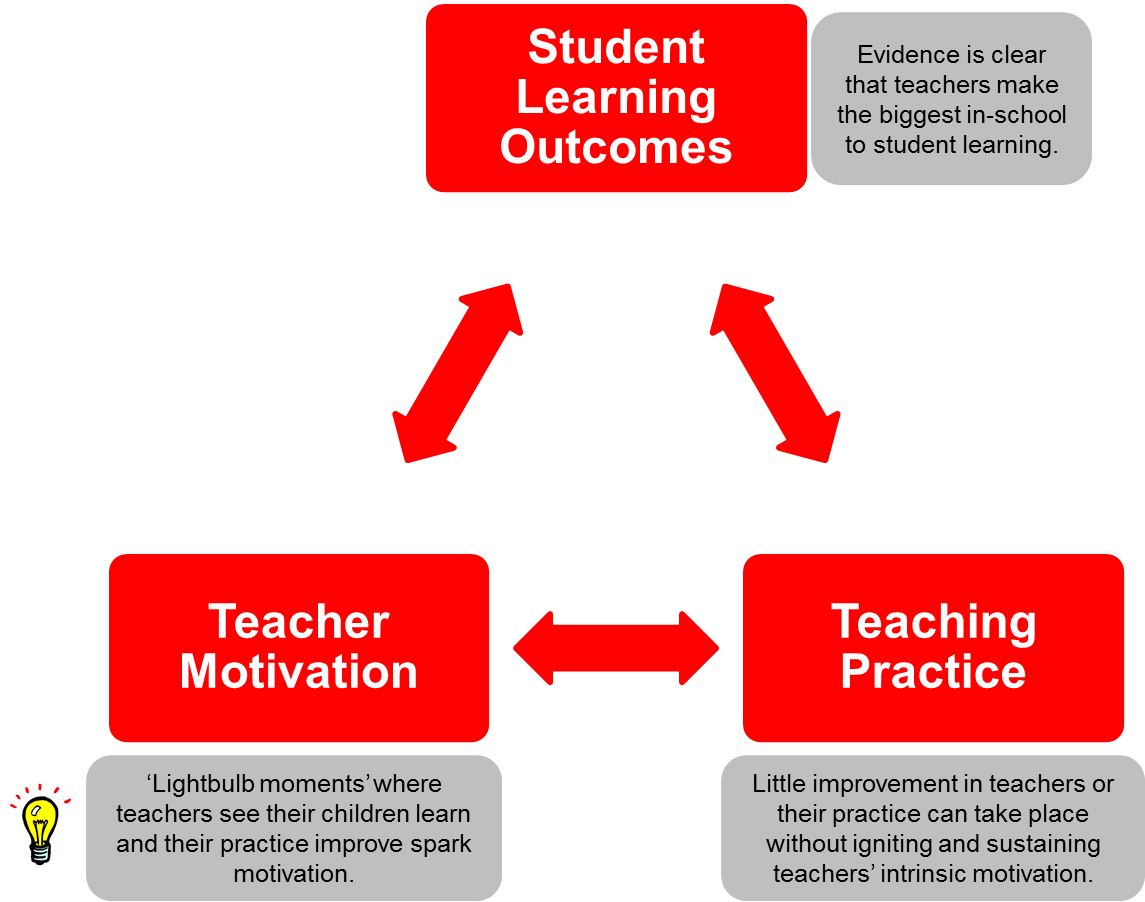 In the beginning, we didn’t do enough to build this virtuous cycle into our teacher journey, and as a result, we weren’t seeing as much classroom change as we would like, based on initial evaluations. We’ve embarked therefore on a major redesign and have now ‘scaffolded’ the journey teachers experience in their networks so they experience quick wins earlier in their journey, building on insights from books like Switch.

People (and teachers) are basically good

Recently I met a new member of a STIR network in Uganda’s Central Region. “Before, I used to get frustrated by a child not being able to learn,” she told me. “But four months in, I’ve developed other strategies to engage them. So now I’ve stopped hitting them.” The principal of the same school told me: “Now, the children are no longer afraid of making mistakes. They enjoy learning. And so they are attending more and putting more effort in.” And children in the school told us: “Our teachers look happier and more confident. They don’t just tell us what’s in our textbooks, but go the extra mile to ensure we deeply learn.”

This is a powerful positive feedback cycle that began with a lightbulb moment for this teacher—a feeling of progress in her teaching skills that gave her an inner drive, a conviction that carried through into further improvements and intrinsic rewards.

The role of an education system is to provide a national “grid of electricity” that enables those lightbulb moments to emerge. It’s an obvious insight, but in most education systems we do a lot to stop these lightbulb moments from ever happening: asking teachers to finish the syllabus irrespective of whether their children have understood what came before, requesting data from them but rarely giving it back in a form that would help them make improvements in their classrooms, or distracting them with non-teaching duties.

Let’s change the global paradigm around teacher motivation—teachers are not Victorian gas lamps that we have to light time and time again through promises of rewards and punishment. Instead, we should be focusing on supporting their intrinsic motivation, the real source of ongoing “electricity”, so they can generate those lightbulb moments for themselves.

Community-wide support for primary students to improve learning: empirical evidence from Madagascar
Ins and outs of rolling out Teaching at the Right Level (TaRl) in Pakistan
Teaching students how to learn: setting the stage for lifelong learning
END_OF_DOCUMENT_TOKEN_TO_BE_REPLACED

END_OF_DOCUMENT_TOKEN_TO_BE_REPLACED

Founder and CEO of STiR Education